What to do in Aggius 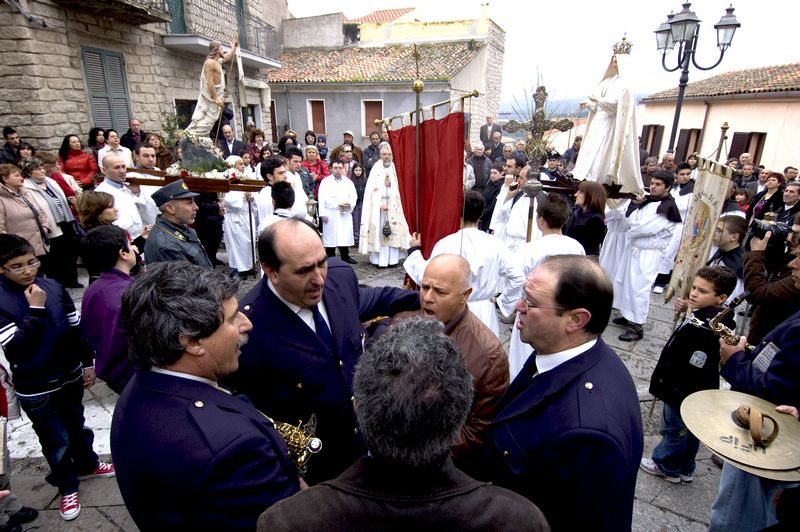 Aggius has ancient roots in the past and preserves a rich heritage of traditions and culture as tales, sayings, anecdotes and fairy tales.
Countless events captivate both local people and guests throughout the year and every moment is perfect, to experience the ancient traditions of the feast days, with a community wishing to carry on its past building the basis of its future.

At the first place the celebrations for the Holy Week, processions and rites of Spanish and Byzantine origin. Starting from Palm Sunday to Easter, the Holy Week is a succession of liturgical ceremonies, inside the churches or in the churchyards and processions in the alleys of the village. Ancient and complex rites -sometimes solemn and sullen like the deposition from the cross – performed as represented in the religious plays, arrived from Byzantine and Medieval tradition.

The birth of St John is celebrated on 23rd June. During the celebration are lit bonfires with mixed herbs, in the street next to the Church of Rosario, on a slab of granite. Jumping the flames stands for courage, jumping them together with other people means becoming compari or comari, this is often a bond that lasts for life, swearing fraternity and help for better and worse.
Part of the ancient agricultural tradition are rural festivals celebrated above all in summer.  Traditionally they are organized to make religious rites, propitiatory for a good harvest. Hereinafter, the organizers invite you to a feast, which takes place on the evening of the vespers and the day after the end of the religious celebration, based on typical local courses.

On the last Thursday of July, the Great Summer Festival takes place, more and more tourists take part every year with much interest. Expositions of local handicrafts, like weaving, woodworking, ironworking and cork working. Tasting of local food like, Suppa Cuata cu lu ghisatu and local roasted meat, homemade bread, cheese, good wine and sweets. Live music and other attractions along the village squares, bars and food courts of the old town centre.

Particularly important for local people is the patron’s saint festival in honour of Nostra Signora Del Rosario and Santa Vittoria, celebrated on the first Sunday in October. There’s also a profane part of the festival, the festival of li Agghjani, single young men that after the Mass used to organize a traditional dance in order to show their ability to the young women. Nowadays the festival is characterized by traditional singings “Lauda alla Madonna”, in Aggius dialect. On Sunday, the celebration comprehends the ancient Mass accompanied by traditional chorus songs, then the procession of the Virgin Mary through the streets of the village accompanied by the local marching band, the flags and local people wearing the traditional costumes and horse riders. In addition, there are also races on horseback, music and theatre performances, concerts, entertainment and tasting of local products.

In addition, there are also Christmas celebrations. Every year in the old town centre, old buildings and old stone warehouses, become the set of the traditional markets, with local handicraft, gastronomic events, nativity scenes and classic Christmas decorations. A consolidated tradition after midnight mass “Missa Zena” in the bars and clubs of the centre, is to exchange hugs and best wishes handshakes. The traditional concert, the Christmas tree, the crib rich of characters are the cornerstones of Christmas celebrations, accompanied by typical sweets: “pane e saba”, “piricchitti”, “papassini” or “cuzzuleddi e meli”.
During the year follow other interesting initiatives such as the competition “flowered balcony” and the International Prize of prose in the language of Gallura and Corsica.