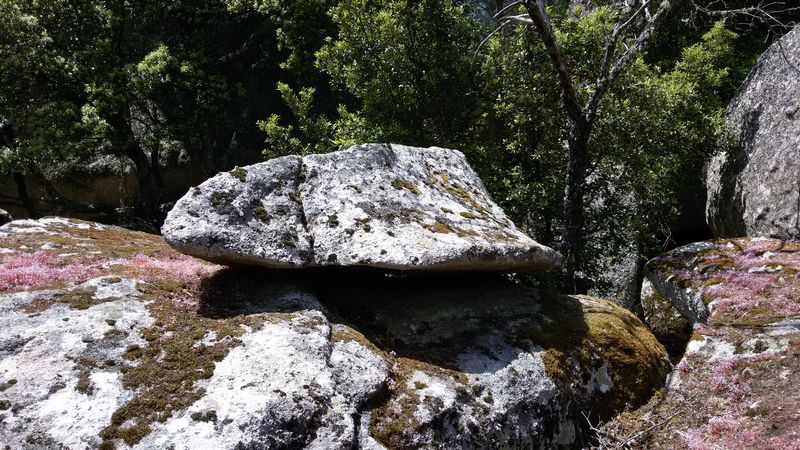 This mountain is the most famous and important among the ones that form the Resegone of Aggius. It overlooks the town and on the highest point an iron cross, which gave its name to the mountain, has been hoisted.
By visiting it, you are amazed by its granite forms and in particular you are impressed by the arch of the devil, which is located a few steps away from the large cross placed on top of the mountain; by the valley of the Virgin Mary, a kind of natural niche carved out of granite, people say that sometimes the Virgin Mary lived there to ward off the devil; by “Lu Tamburu Mannu“, a large granite slab laying on a paved block. It is sufficient to go to the brink and to apply force with the body for making the stone swing, wave and produce a dull rumble, dumb, constant like the moan of thunder in the distance.
According to the old people, this drum has always existed, and seems to have evil influences. People say that when you hear the rumble is certain that a person has died or has to die by a violent death. (E. Costa, The Dumb of Gallura).
A legend say that every day, at nightfall, the devil looked out on the mountain “Tamburu” and, after planting the huge feet on mountain and placing his hands on another rock in front of it  (there are four natural cavities on those boulders that legend precisely attributes to the fingerprints of Satan), he made it wobble emitting roars similar to the roll of a giant drum, saying in a deep, husky voice the terrible threat:

And according to the legend, this is for giving the country the right punishment because of the killing of about seventy people for the fierce enmity, in the second half of 1800, between the Vasa family and Mamia one for the failure of the marriage between the choleric Peter and the sweet Mariangela.
The population of Aggius, terrified by the daily threats of the devil, decided to take action: they appealed to   the parish priest, ” li rasgiunanti ” of the country (the country’s wises) were called in for consultation but in vain, because the devil went on tormenting the population.
Towards the second half of the nineteenth century, a missionary in Aggius thought  of ​​planting a large iron cross on the mountain to scare away the devil.
All the inhabitants went to the mountain in a prayerful procession, and it is said that on that night a gale  blew. It uprooted many old oaks and make more than a mass of granite precipitate by the mountain. All the houses shook from the foundations, but the cross remained steadfast. The inhabitant of Aggius ran terrified by the Rector, but he sent them home saying “it’s the devil back to hell”.