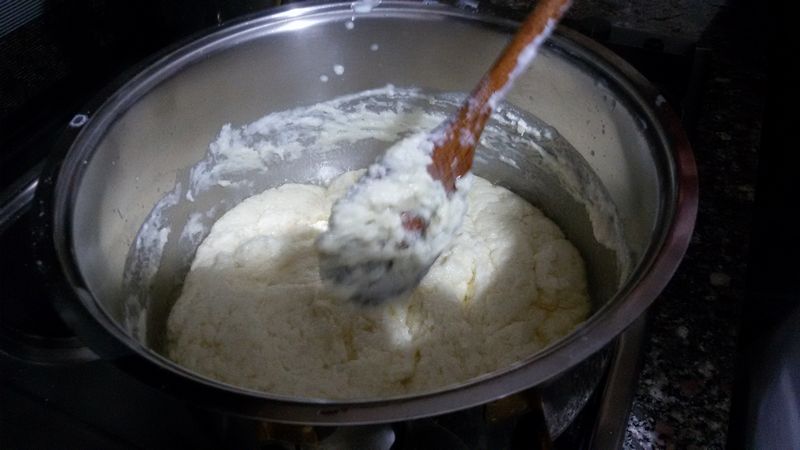 Mazza frissa prepared mainly with the cream lu pizu, obtained skimming full-fat milk. Cook the cream in a pot, add bread flour and keep stirring it until it becomes creamy. You can eat it alone, adding sugar or honey, or as a sauce for gnocchetti and fava beans. Adding some diced soft cow’s milk, you will create another tradition meal of Aggius called: lu casgiu furriatu.

Pour the cream in a pot and cook at low-temperature; Keep stirring it with a wooden spoon to avoid burning, until boiling; little-by-little add bread flour and a spoonful of salt. If the operation completed successfully, the protein portion and the fat of the milk will separate. Sweat the mixture, eliminating the excess of fat from the cream. After about fifteen minutes from boiling you will get a soft and compact mixture (the Mazza frissa) and an oily left-over (Ozu casciu). Collect the oil in a suitable storage container.

Despite attention in preparation, usually remains the cooking scorched (called attentu or razzicu), for many people this is the best part (particularly among children).

It’s undoubtedly part of our culinary tradition, some sayings related and recalling everyday life come from it; In Sardinian language people used to say: swaety like a mazza frissa to someone whose face was sweaty and comparing someone who appeared swollen or weak to a mazza frissa. Furthermore, until few years ago, people used to cook mazza frissa for lunch or dinner on St John’s day (24th June, magic day of the year). After eating a lot without drinking, you should go to bed. Above all young people searching for their kindred spirit would make numerous precognitive dreams above all young people waiting for their kindred spirit, the person who would have satisfied thirst in the dream, would have had the name of the future husband or wife.