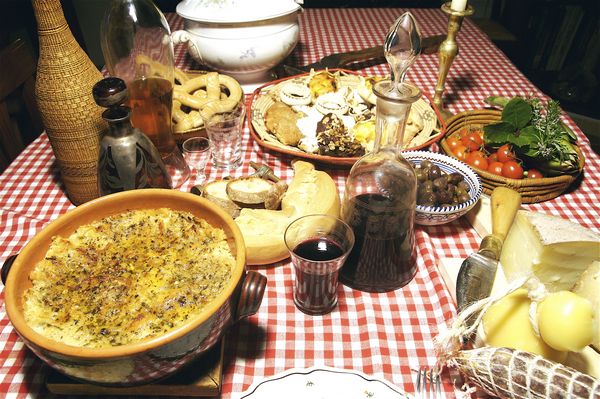 The preparation of the typical dishes of Aggius have a seasonal approach, depending on how much of the ingredients used were tied to different periods of the year.

The most well-known and celebrated dish of Aggius is the “zuppa gallurese” which is prepared with alternating slices of stale bread and slices of fresh cheese, grated cheese, a mix of parsley and a pinch of pepper. The layers are then soaked in a broth made from the beef or sheep otherwise pork and it is then put in the oven in a baking tin or cooked in a large container called “lu caldari”. If you like, you can also accompany the dish with a pasta sauce with veal: “lu ghisatu”. The ravioli, “li bruglioni”, are prepared with a pasta filled cheese or ricotta, eggs, sugar and lemon. They are cooked in boiling water then served with a pasta sauce and grated cheese, otherwise fried and served with sugar and honey. Another delicious dish is the gnochetti – “li ciusoni”, it is a pasta prepared with flour, water, salt and each piece is made individually by pressing each piece of pasta onto a ridged base, they are then cooked in boiling water and served with a pasta sauce with grated cheese. An unmissable tradition is also “li fiuritti” and “li taddarini”, a type of taglietelle made from flour, water and salt which differentiate from each other from the thickness of the pasta and from the accompaniment: a tomato sauce for the first, whilst the second comes with a soup or broth. You can also try “la mazza frissa” either on its own, along with sugar or honey or to use as an accompaniment for the gnochetti pasta or with fava beans– it is prepared mainly with cream – “lu pizu” which is obtained from the skimming of whole milk and put on a fire inside a pan along with semolina and salt and stirred continuously until it is no longer creamy. If at the end of the cooking, you then add cows cheese cut into cubes, you will obtain another traditional dish from Aggius called “lu casgiu furriatu”.

No less important are the many soups which are prepared mainly with pulses, vegetables pork and salt.

Within the main courses (secondi) to highlight: roast meats in general; “la rivea” (innards of a baby goat, skewered along with the intestines, cooked on the grill or in the oven); baby goat in a stew “in brudittu”, prepared with lightly fried onions, parsley and concentrated tomato accompanied with potatoes and artichokes.

The different cheeses used differentiate between the various woven pasta dishes, such as “lu zucchittu” and “la panedda” and the raw pasta dishes such as “lu casgiu ruzu”. How can we not mention, the large varieties of meat cuts obtained from the pig? Fresh sausage and cured sausage (salsiccia), salami, cured neck (capocollo), belly pork – both flat or rolled (pancetta tesa or arrotolato, the cheeks (guanciale) and seasoned lard or fat (lardo) are all enjoyed by everyone of all ages.

Also the preparation of the typical sweets was always linked to the various annual events. During the period of the carnival, they prepare; “l’azzuleddi”, plaits of fried pasta and boiled in spiced honey with orange peel; “li brugliette” or waffle, which are strips of pasta that are friend and served with icing sugar; the unmissable “li frisgioli longhi” which are fried batter, like that of a donut, fried in long pipes; Typical from the time around Easter are the formagelle “li casgiatini”, prepared with fresh cheese or ricotta and raisins as well as the peaches “li pessighi”, which are disks of filled pastry with marmalade and bathed in alchermes (a spiced liquor) and in sugar. For the remembrance and commemoration of those who have passed, they prepare “li papassini”, “la tulta” and “lu pani di saba” e “li cuzzuleddi”. “Li piricchitti” which are biscuits covered with icing (“la cappa”) are the local sweets for all year round. During the time of “lu pulchinatu”, the killing and preparation of the pig, they bake in the oven the delicious “l’ozatini” which are made with bread dough and which are then used with the leftover fat from the pig “jelda” which is then left to set to obtain its structure and baked in the oven.

We will finish with the bread, which is a fundamental food in the diet of all of the families. The flour which is used for its preparation is either of the soft grain “trigu cossu” or of the hard grain “trigu ruiu”. They come baked in variation forms: “cozzula”, “catriggja”, “pani a mela”, “pani d’agliola”, etc. It is customary at Easter to give to the children as a best wish, the bread which was cooked with a boiled egg inside (culbicciolu, borsetta and puppia).

It is also worth mentioning the wine, the reds are obtained from the various indigenous vines whilst the whites worthy of note are the Vermentino and the Moscato.