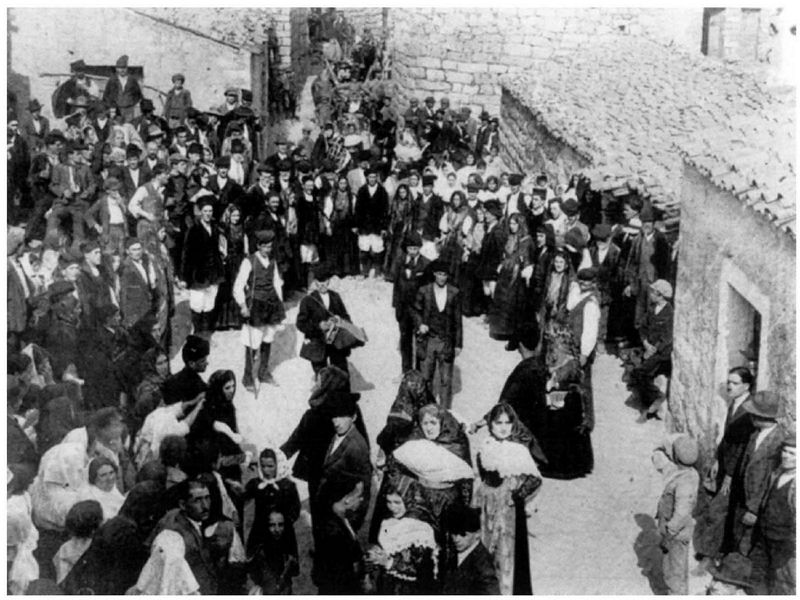 In Aggius and generally in the whole Gallura, in 1800, the wealthy person, the wealthy landowner, lived with his family in a house made of granite and walls in sight. The house was usually accompanied by and adjacent or facing room, the latter separated from the house by a small free and an open space “la colti.”

The building, “the casedda”, as big as a large room, with granite walls covered with raw mud plaster, served as a warehouse. It had a rustic door, “the janna” that led to the “colti” and in the opposite wall there usually was a very small window, “lu balcunittu” that ventilated it, restricting properly the entry of the summer heat or the winter cold.

In “la colti”, next to the warehouse door, there was peculiar but functional hearth, built with circular stones, an atypical “fughili” with the usual tripod “trìbbita”, always ready to support the big pots or cauldrons “Caldari”, where at parties or several celebrations meat or “suppa” were cooked or where milk was heated for cheese “casgju” and ricotta “Brozzu” preparation. Near there was the “disca”, a circular metal box where the cheese took shape, and the “vùlcula”, a wooden base to be placed in “Lu Caldari”.

In the warehouse, hung on the wall, near the door, there were the tools required for this purpose: the gridiron “graiglja”, skewers “spiti”, big ladders “truddi”, skimmers “truddi paltusàti, kettles and large lids. In a corner of the warehouse was arranged the “luscja”, a large mat of detached striped reeds shaped like a cylinder storage of the grain supply for a year and even more, in case of any bad years. Near there was a sack containing non-refined raw flour. Next to the “luscja” on the wall, you could see hanging sieves: ” lu siàzzu lalgu ” used to separate flour from bran and ” lu siàzzu strintu ” for the separation of white flour from wheat semolina; near there was the “siàzzatogghja “: wooden base to support sieves during the sieving.  The baskets “canistrèddi” of various sizes, were proudly displayed. They were used to contain fresh bread: white flour bread “catrigghji” and durum wheat semolina bread ” cocchi ” or traditional sweets, before baking it.

In the”casedda ” hang also the “zubbìni”, a sort of baskets of various sizes, which were used to contain fruit or supplies; dried gourds of various shapes and empty of the pulp and seeds ” zùcchi “, used to contain liquids; and containers made with cork for several uses.

Hang in another corner and well placed, away from prying eyes, there were the guns ” fusìli ” and cartridge belts “caltuccèri” used for hunting mouflon, deer and wild boar “pulcàvru”, and small game: hares ” lèppari doves ” tuttùrelli “and partridges” pranìzi “[1].

Under the ceiling made of reeds “Cannizzu” and close to the window, hanging in the air by ropes anchored to the rafters, raw spruce and beech poles “bàltighi”, held up the sausages: “salàmmu” and “saltìzza”, prepared after pig slaughter “pulchinàtu” and left there to dry on fix-term.

In these lines we wanted to describe the traditional warehouse of 1800, so you may know that the “casedda” was like so, located in the current Via delle  confraternite, dated  back to the 19th century and whose owner was Rosa Vasa in Pasella, better known as zia Cioja by the inhabitants of Aggius, mother of the current owner Andrea Pasella.
You could access it through  “la colti”, an ancient door and to enter in it was necessary to go down for some steps “stairs”, as  the warehouse was built in a lower plane than the one of “la colti”, with the walls that in some points rested and rest on live rock. The “casedda” was and is also equipped with a side door that opens into the narrow passage that connects Via Marconi with the current Via delle Confraternite that since ancient time was known as Via delle Poste.

In 1954 unfortunately this ancient building suffered from changes that have altered the functionality and weakened the structure. With the intervention of the mason Leonardo Tansu, and under the direction of prof. Giovanni Andrea Cannas, a part of the wall was demolished, just where there was the window that disappeared. With the support of a granite arch a large opening was created to allow access from Via delle Confraternite and a different use. For easy access was lowered in part the level of the floor with consequent damage to the wall perimeter structure.
Then the warehouse was divided into two parts by a wall made of planks. The top with the access to “la colti” was used by zia Cioja as woodshed and the wood was introduced into it through the side door that is located in the bottleneck; the part with the lowest base level was given for an unremunerated use to the family of Giovanni Pirisino, who lived across the street.

In 2005, after noticing some signs of collapse of the structure, they reconstructed the roof and secured the crumbling old walls that are now supported by reinforced concrete at the base of the walls, which are also held together by tie rods that prevent the walls from collapsing, as we hope, for a long time.
The warehouse, brought back to be one space, is now a building of historical importance, is subject to restrictions and is under the attention of the Municipality and the Superintendence of Cultural Heritage and Fine Arts; it can no longer undergo clumsy interventions, it can no longer be modified in its structure that now is similar to the original. For his “age” it deserves respect and care.

Today the “casedda di zia Cioja ” has an arch opening with a good and elegant workmanship wrought-iron gate and closed at the bottom by shatterproof glass; it seems that you want to fix it inside a recovered old mill, showing off in the right place.

The tourist, host in Aggius, stops and looks at our ancient cultural heritage that is there to witness, nobody can know for how much, the distant past of our history, a “modus vivendi” made of simple things that are staggering to our times just now that nothing is permanent. In fact, within a few decades, everything changes: in the structures, in the ways of living and the ways of being.

Photo 1-Aggius 1921: scene of the film ” Cainà “, filmed in Via delle Confraternite. At the bottom ” la casedda di zia Cioja ” without the arch is partially visible.

Photo 2-Aggius 1999: “la casedda” decked out with a typical carpet of Aggius on the Corpus Christi procession.

Photo 4-December 2006: Nativity, work of the artist Simone from Aggius.

[1] Sometimes they improperly use the rifle, against their own kinds! See: feuds